In memory of Juliano Mer-Khamis

A little over a month ago, Juliano Mer-Khamis stood on the stage of his Freedom Theater at the edge of the Jenin refugee camp.
Directing his remarks at the young, noisy group of children making its first-ever visit to a theater, he said: "This is a dangerous show, with subversive messages. Whoever talks will be thrown out of the hall." 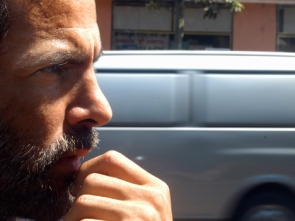 A hush came over the audience. For the next 75 minutes, I watched one of the loveliest, most stylish, political plays I had ever seen. None of the children interrupted the show, with the exception of one infant who burst into tears at the sight of the servant hanging on a rope.
The Freedom Theater presents "Alice in Wonderland," by Lewis Carroll. Directed by Juliano Mer-Khamis, with Udi Aloni as playwright. I first saw Mer-Khamis in another time and another place. It was in the late 1980s, when he stood for a number of days in the front yard of the Israel Fringe Theater festival in Acre, his naked body dipped with oil as part of a one-man show that knew no end. Years later I caught "Arna's Children," a brilliant film which he co-directed with his dying mother, Arna Mer, the founder of the theatre in Jenin and the daughter of the doctor who cured malaria in Rosh Pina. It is arguably the most moving film ever created about the Israeli occupation. Since then, I have met him on numerous occasions, always in the camp. This tall, strapping, handsome man who oozed charisma, a Jew and an Arab on account of his parents - perhaps a Jew in the eyes of the Arabs and an Arab in the eyes of the Jews - decided to devote his life to Jenin, where he lived as an Israeli and as a human being. One of the most talented theater actors to ever emerge here was also the most courageous of them. The seven bullets extinguished the light of courage that he radiated. "Jule was murdered," a trembling voice belonging to a refugee camp resident on the other end of the phone told me. My voice also trembled.
from :haaretz.com
a 19:32