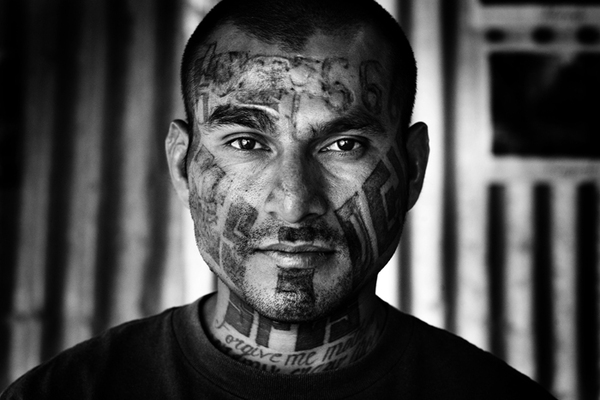 La mostra personale di affronta il difficile tema della violenza giovanile in Honduras. I ritratti dei giovani componenti delle spietate gang che mostrano cicatrici e tatuaggi su tutto il corpo, le atmosfere sospese di quartieri urbani, dove la calma è apparente e sembra sempre che stia per accadere qualcosa, caratterizzano questa coraggiosa ricerca, nobilitata da un pregevole bianconero dai forti contrasti.
Fonte: La Repubblica
In Honduras crime is endemic. With a population of 7.3 millions and 4.473 homicides, its per capita murder rate in 2008 was 59,7 x 100.000 inhabitants, the second worst in the world. 25,2% more murders compared to 2007. More than twelve violent deaths a day. 78.6% of these people were killed with a gun. The most violent day of the year was Christmas with 38 killed. 65% of the murders were committed in public places of Tegucigalpa and San Pedro Sula, the political and the economic capital of the country, by hired killers, usually members of a gang recruited by the Mexican and Colombian narco cartels. More than 30% of the victims had less than 24 years of age.
The country has a youthful population; 50% of Hondurans are under the age of 19. But endemic poverty, chronic unemployment and the prospects offered by drug trafficking have contributed to a virulent crime wave conducted mainly by youth gangs known as "maras". The maras are said to have tens of thousands of members and use threats and violence to control poorer districts in towns and cities. The maras, are spread all over Latin America and were imported from California by returning immigrants. Honduras was the last and the most unprepared State of Central America to cope with this youth phenomenon. In 2003 a plan of specific laws against the maras was implemented by the government and substantially gave the police the right to arrest anyone suspected of being a member of a gang, just for having tattoos or the way of dressing. After the 2005 presidential electoral campaign which saw Pepe Lobo, the National Party candidate, promise the population to reintroduce the death penalty, the gangs changed their criminal habits and their strategies. Both the biggest maras, the Eighteen Street or 18 and the mara Salvatrucha or MS13, became partners of the narco cartels running the drug business. Those who decide to quit the mara have to live with a lifetime death sentence on them. It’s a rule. No one can leave behind his mara, and doing so he put at risk the life of his familiy and friends, at all times. Most of them grew up in the streets and entered the gang very young. Fabian, Ana, Nelson, Luis Omar, Robin, Carlos Alberto, Axel were well known with the names they were given entering the maras. El Demente, la Casper, el Sombra, el Plaga, el Pantera, el Bestia, Spike. All of them have killed the first time entering the mara, when they were “initiated”. Abandoned from their parents, they thought the gang as a new kind of family but without really knowing what it was, its strict rules, the stress of living under constant threat and the immense quantity of violence it would have brought in their lives. Like them, there are some 50.000 kids at risk reported only in Tegucigalpa. Probably ten times more in all the country. In Honduras, social discrimination is very strong. There is an increasing feeling of uncertainty about the chronically poor security situation, the widely spread corruption among politicians and police officers. The increasing number of people living in extreme poverty is leading to an always higher number of kids living in the streets and most likely going to enter the maras.

Honduras, march-april 2009.
Nanni Fontana was born in Milan, Italy, in 1975. Since 2003, he has been working as a professional photographer and has collaborated with New York based agency WpN World Picture Network and Milan based agency Prospekt Photographers. He is now an independent photographer working with charitable foundations and nongovernmental organizations.