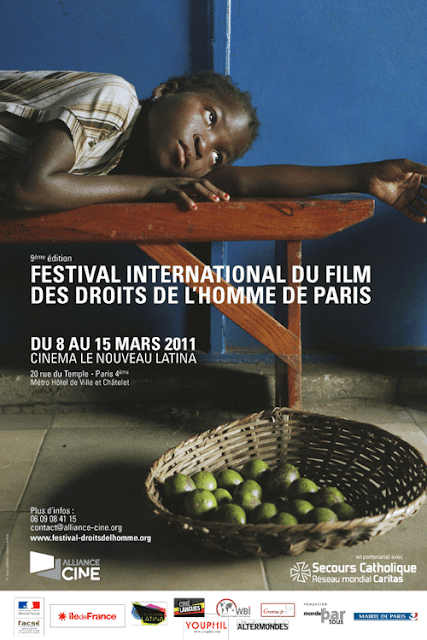 9th edition of the festival : 8 to 15 march 2011
The [A]LLIANCE association has been organizing the annual International Film Festival on Human Rights for the past eight years. This event is held at the Nouveau Latina Cinema (Paris 4ème -M°Hôtel de Ville/Châtelet). The Paris International Film Festival on Human Rights has become the most prominent, annual cultural event on human rights. Aimed at the general public, the goal of the festival is to raise awareness and promote education in film in schools and among young people. . Every year many new films or previews are shown. The festival also contributes substantially to the variety of films that are shown each year as the majority of its productions are not normally screened in Ile de France. The FIFDH is organized thanks to the support of the Mairie de Paris, the Conseil régional d’Ile de France, the Acsé and the Secours Catholique-Caritas France.

FIFDH Thursdays
Throughout the year, on every second Thursday at 8:30pm, the FIFDH team organises a screening-debate on an unreleased film in the presence of a(its?) director. More informations on www.festival-droitsdelhomme.org/projections-mensuelles/
African editions
In 2007, [A]LLIANCE organized the first FIFDH events to be held in Lomé (Togo) and Bangui (Central African Republic). The festivals were supported by the European Union, the Organisation Internationale de la Francophonie and the UNDP United Nations Development Programme.

The Human Rights Films Network Since 2004, the various film festivals, which all aim to promote the protection of human rights, have been brought together in a coalition within the Human Rights Films Network. This network now brings together more than twenty festivals worldwide, some of which are backed by major international human rights organisations such as Amnesty International and Human Rights Watch. The network seeks to widen the distribution of films which tackle important human rights issues and supports the emergence of new film festivals on human rights. The network offers advice on programming, fundraising and overall organization, especially in developing countries. Every year, the HRFN attracts a combined audience of more than 200,000 people worldwide.
The full list of festivals is available at www.humanrightsfilmnetwork.org
a 16:57