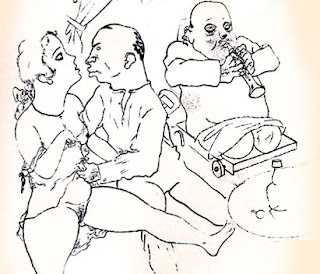 "War freed many an individual," he says, "from the environment he hated and the slavery of his everyday routine. This is one of the psychological causes or enigmas of war and that is why there is and always will be war."
It would be difficult to prove him wrong. Despite the vast economic changes since World War I, despite the improved conditions of the worker, despite all the comforts, improvements and tremendous possibilities open to us today, man is still a victim of his environment, a slave to ideas and ideologies, still preoccupied with ways and means to kill more effectively, to assert himself over those who disagree with him, to have his way at all costs, even if it means the annihilation of the race itself. The man who can lead us out of this morass is nowhere in sight. Not only has the artist failed, but so has the statesman, the priest, the educator, the scientist, the thinker. Now, if ever, we must lift ourselves by the boot-straps.
In that Gilded Age before the first war, which promises to continue for a century, life in America was more like that in Europe than it is today. We too had our beer gardens, our outdoor music halls, our excursion boats and picnics on the lawn, even our Saengerbunds and Turnverein. We had our Socialists too, then regarded with almost the same contempt and hatred as are the Communists
today. (As a boy, in my uncle's beer saloon on Second Avenue, N. Y., I used to listen to my
grandfather, who had fled Germany to escape military service, inveigh against the "boss tailors.") Soon I would be reading Jack London's fiery revolutionary speeches, for delivering which he would have been imprisoned today. Going to work I read Goethe, Heine, Schiller in the original, and when I descended the long flight of stairs at the Manhattan end of the Brooklyn Bridge there on the sidewalk were piled up the latest issues of Simplicissimus, Jugend and Der Querschnitt, along with the German newspapers. The works of artists such as Nolde, Lovis Corinth, Edvard Munch, James Ensor, Erans Masereel were familiar to me as they were to Grosz, through reproductions. The etching by Anders Zorn of the famous actress, Tilla Durieux, hung on my wall opposite one of Strindberg. Nietzeche and Dostoyevsky had appeared on my horizon. Kropotkin too, and the great Russian dramatists, among them the beloved Maxim Gorky. Superficially it was the era of "Wine, Woman, and Song"; underneath there was turmoil and ferment. Emma Goldman, Eugene V. Debs, Elizabeth Gurley Flynn, Jim Larkin, these were headline figures. Soon would come Dada, followed by Baba and Caca, by Diaghilev, Nijinsky, Cocteau, and other blazing comets.
Perhaps I do not have these names and events in strict chronological order. What matter? They were all there, if not on the scene then behind the scenes. Their presence was disturbing and arresting. Though toilets were now largely indoors instead of in the backyard, though gas light had replaced the kerosene lamp and one might wash in a porcelain tub instead of a tin washtub, though the streets were beginning to be paved and the horse-drawn trams were being discarded, the new century had not yet fully made itself felt. In many ways we were still living in the nineteenth century. We believed in Progress, Advancement, Enlightenment. One could still drink Rhine wines, Moselle, and Claret along with the choicest liqueurs, and if I remember right, the free lunch counters were still serving more delicious, palatable food than one can get today in an ordinary restaurant. At the same time we were getting stronger and stronger doses of Freud, Krafft-Ebing, Oriental philosophy, New Thought, Christian Science, and other intellectual and spiritual hors d'oeuvre. The publisher Knopf was already beginning to serve us much-needed translations of Europe's famous writers. The Haldeman-Julius chap books - at five cents apiece, was it? - were making the masses aware of good literature. John Cowper Powys was bringing culture to America through lectures in every town and hamlet of America, often for as little as ten cents a lecture.
a 15:34