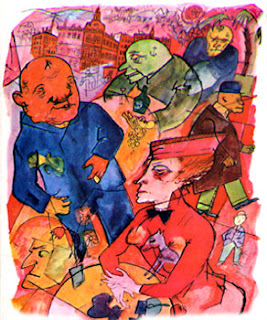 Looking at the drawings in Ecce Homo today I am filled with the same excitement and unbounded admiration for the artist as I was in 1927 when I first saw his work. All through the years these expressions of despair, hate and disillusionment, as Grosz himself called them, have remained with me as if burned into my brain. I know of nothing to compare with them in our time, or in any other time. They are as naked and ugly, as beautiful and eloquent, as truth itself. Shortly after I received a copy of that first edition I began to draw and paint myself. The first thing I attempted was to copy the portrait on the cover - Mr. Homo himself - which I had assumed was a caricatural self-portrait of Grosz. Since I had never evinced the least ability to draw, this first successful effort gave me confidence to continue a pursuit which has given me as much, if not more, pleasure than writing.

Recently, reading Grosz' autobiography* which I missed when it first came out, I became just as excited as when I first saw his drawings and water colors. The similarities between his life and background in Germany and my own in a German-American neighborhood in Brooklyn impressed me. There was this difference, to be sure, that in my early days I had no burning desire to be an artist, or for that matter, anything. We who were born before the end of the century look back with nostalgia on that fin du siecle period which lasted well into the twentieth century. Most of the great figures of our time in the realms of art, science, and politics, had already been born, though the masses were only dimly acquainted with their work. I am thinking of men like Picasso, Stravinsky, Spengler, Chagall, Rabindranath Tagore, Romain Rolland, Barbusse, Kandinsky, as well as Lenin, Trotsky, Freud, and Einstein. (To say nothing of such popular idols as Max Linder and Charlie Chaplin).