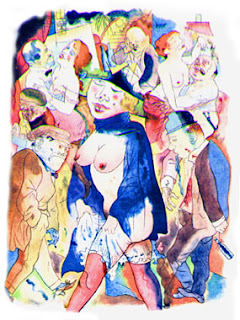 Yes, the end of the nineteenth century witnessed the rise of some of the greatest figures in modern times. Only now are we beginning to reap the bitter fruits of their discoveries, their revolutionary ideas, their destruction and their creations.
It was a period without the comforts, gadgets, and technical developments of today. Lighting, plumbing, heating, transportation, communication, all were primitive by present standards. Yet there seemed to be an atmosphere of peace and contentment, even a gayety which we today no longer know. Before the great smash-up there had been only four wars that I can remember: the Spanish-American war, the Russo-Japanese war, the Boer war, and the Balkan wars. The ground was already giving way, of course, the workers were on the march, with Utopia as always just around the corner.
Looking at the sad, confused, ignoble picture of the world today, one wonders indeed what effect the great spirits in the realm of culture have had upon our behavior. The second World War, if not the first, demonstrated beyond question that the most cultured nations of the earth could behave even worse than the so-called barbarians. Grosz, whose faith in man had been shattered by the first war, put it thus: "The best thing for art is for it to be treated as a hobby, an incidental thing. For, after all, what do we artists, we insignificant little ants, have to say? We, who are nothing more than blown up frogs? Where is our influence? Where, our significance? Do we change the general picture in the slightest?"*
If this statement sounds too sweeping, think back over the course of history. The greatest of peoples, the most cultured, the most civilized, never ceased to make war, to massacre, torture, persecute their neighbors, creating at the same time great works of art, cathedrals, seats of learning, and so on. It all went hand in hand. Even America, the land of the free, was indoctrinated from the beginning with the idea that in time of peace one should prepare for war. And of late there is current the idea that one must fight for peace. "Peace, it's wonderful!" But when, how, where? More than ever it seems like a mirage. In the name of the man who came to bring peace on earth we have been slaughtering one another without letup for centuries - the Crusades, the religious wars, the Inquisition, pogroms, gas chambers, every atrocity, every iniquity imaginable.
In telling the story of his life, Grosz makes mention of the deep impression made upon him by "the alluring horror panorama paintings" which he saw as a child at fairs and rifle matches. He asks himself why these scenes of blood and murder should have taken such a hold upon him. "Was I specially selected to experience horror?" he asks. Even in school, aware of the sadistic behavior exhibited by teachers and students alike, he notes that "it was as if I had uncovered a profound law of brutality."
In 1916, stricken with a combination of brain fever and dysentery, he was sent to the rear and later given an honorable discharge, but with the understanding that he might be recalled to the front. It was in this period, living in Berlin, that he began the sketches which would later come to fruition in Ecce Homo and elsewhere. The description of these sketches, which he gives in his own words, is as brutal as the drawings themselves. In 1917 he is drafted again, found guilty of desertion and sentenced to be executed, then sent to the insane asylum from which he is discharged, again subject to recall. Can one wonder that he found no place in his work for "sweetness and light"? Is it any wonder that he was, as he admits, filled with an utter contempt for all mankind?
*These and other quotations by Grosz are all taken from his autobiography.
a 15:31