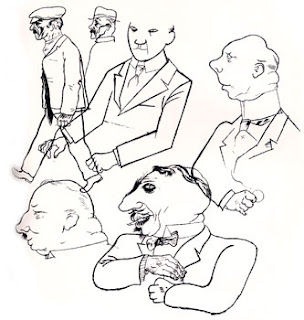 W. E. Burghardt Dubois, bless his name, was already opening our eyes to the riches of African culture. Marcel Duchamp had not yet abandoned painting for chess, and would soon be exhibiting his famous toilet bowl as an expression of his contempt for bourgeois art. Chagall had already acquainted us with his roof-top violinists and his dreamy, topsy-turvy figures flying through rainbow colors. The six-day bicycle races still packed huge crowds at the old Madison Square Garden, as did Jim Londos, Strangler Lewis, and Earl Caddock. Alfred Stieglitz had opened his famous Studio on Fifth Avenue where the new trends in art were exhibited and discussed with intense interest. The theatre was also coming alive and drawing enthusiastic audiences in such playhouses as the Portmanteau Theater, the Neighborhood Playhouse, the Greenwich Village Theatre. The Settlements on Henry Street and elsewhere in Manhattan were inspiring centers of cultural activity. The lower East Side, with its foreign restaurants, cabarets and cellar cafes, was the most alive, the most interesting and the most fecund part of the city. The Café Royal on Second Avenue, where many famous columnists of the day gathered, was like a bit of old Europe. Here in the ghetto one could still hear the zither and the cymbalon. Hot jazz, or jazz hot, was still the offing. We weren' t jazzed up yet, nor even hopped up, but we sure were fucked up and ripe for the toboggan. Figures like Scott Fitzgerald and Harry Crosby would soon be startling the country with their playboy antics. Theodore Dreiser was writing Sister Carrie, a book which would stun the public by its realism and naturalism. Ben Hecht had probably begun his daily column, to be known in book form as A Thousand and One Afternoons in Chicago. As for Frank Harris, I had just made his acquaintance through that Greenwich Village bohemian, Guido Bruno. It was my privilege to have helped Frank Harris get in and out of his trousers at my father's tailor shop, while listening to his heavenly discourses on Jesus, Oscar Wilde, and Shakespeare.
I recount these souvenirs of my "anecdotal life" to indicate some of the similarities between life here and abroad in this formative period of Grosz' life. Life was unbearably dull or tremendously exciting, according to the milieu in which one found himself. While Oswald Spengler was preparing his monumental picture of doom, we on both sides of the Atlantic were masturbating in our dreams. The huge crack in the wall was visible only to a rare few. The House of Certain Death* was located not in Egypt but in the Western World.
In a way, Hieronymus Bosch prefigured everything which was to come, and is still to come, for the end is not yet. Bosch, an initiate, takes us out of and beyond history; Grosz, who called himself "a simple, ordinary man," merely indicts his time, his people, and the hypocrisy of man. There is nothing Surrealistic about Grosz' portraits; distorted, exaggerated as they are, we recognize the subjects for the everyday figures which they are. He simply removed the blinders with which we had been accustomed to viewing them. He saw them with X-ray eyes, penetrating not only the flesh but the mind and spirit as well. Most of us will still look upon them as the dread enemy they once were, but can we be certain today that we have nothing in common with them? Or is it that the genius has not yet been born to us who is capable of unmasking our spawn of brutes, misfits, and phonies of all sorts, all creeds, all ideologies?
*A novel by Albert Cossery: New Directions, N. Y., 1949.
From Evergreen, By Henry Miller
a 15:35