Linotype: The Film is a feature-length documentary film centered around the Linotype typecasting machine invented by Ottmar Mergenthaler in 1886. Called the "Eighth Wonder of the World" by Thomas Edison, the Linotype revolutionized printing and society, but very few people know about the inventor or his fascinating machine. The Linotype completely transformed the communication of information similarly to how the internet is now changing communication again. Although these machines were revolutionary, technology began to supersede the Linotype and they were scrapped and melted-down by the thousands. Today, very few machines are still in existence. The highly-skilled operators of the Linotype are in a battle against time. If their skills are not passed along to a new generation of operators, the machine will die completely. There is a small group of former operators that want to save the Linotype from the scrap yard, but some see this as a fruitless endeavor to slow down progress.
This film is about a machine from the past, but that does not mean this is a sentimental fact-film lamenting the loss of a technology. We are compelled to dig deeper, and find what the Linotype has to say about the present and future. Production started in August of 2010 and it will be released late fall, 2011.
* Linotype: The Film Official Trailer The Making of a Promotional Poster 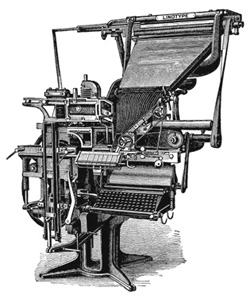 The Linotype sped up printing production by mechanizing the process of setting type that is printed for newspapers and books. Before Mergenthaler's invention, typesetting was a time-consuming process that was done by hand and was the major bottleneck in the production of printing.
The Linotype casts an entire line of type at one time (hence the name "Line o' Type"). It produces printable type six times faster than a person. With the invention of the Linotype, the printing of newspapers and books skyrocketed. This dramatically changed journalism and society as a whole.
Ottmar Mergenthaler emigrated from Germany to Baltimore, Maryland in 1872. While employed by his cousin, he began working on the complex challenge of mechanical typesetting. Although many people were competing to invent a machine that could set type mechanically, it was Mergenthaler's mechanical genius that eventually found the solution. His first working machine was put into service at the New York Tribune in 1886.
The Linotype was the machine everyone was waiting for. Even a syndicate of investors that tried to control the Linotype could not stop the almost instantaneous popularity of the machine. Sadly, Mergenthaler never saw the full impact of his invention as he died of tuberculosis in 1899 at the age of 45.
The Linotype quickly became an indispensable part of the printing industry. By the early 20th century, there were tens of thousands of machines in service all over the world in many different languages. The explosion of printing created jobs for highly-skilled workers that became specialists in the Linotype.
Photo typesetting technology began to overtake the Linotype in the early 1950s. By the 1970s, the Linotype was no longer state-of-the-art, and printers started scrapping the machines because they were thought to be obsolete. Today, very few machines exist. Even fewer are in operation.
The future of the Linotype is uncertain. It is unknown if the skill to operate and maintain the machine will be passed on to a new generation. If there is no one to run these machines, they will only survive in museums, sitting silent and gathering dust.
a 17:18