Serpentine Gallery Pavilion 2011
Designed by Peter Zumthor
1 July – 16 October 2011
The Serpentine Gallery is delighted to reveal the plans for the Serpentine Gallery Pavilion 2011 by world-renowned Swiss architect Peter Zumthor.
This year’s Pavilion is the 11th commission in the Gallery’s annual series, the world’s first and most ambitious architectural programme of its kind. It will be the architect’s first completed building in the UK and will include a specially created garden by the influential Dutch designer Piet Oudolf.
The concept for this year’s Pavilion is the hortus conclusus, a contemplative room, a garden within a garden. One enters the building from the lawn and begins the transition into the central garden, a place abstracted from the world of noise and traffic and the smells of London – an interior space within which to sit, to walk, to observe the flowers.
With this Pavilion, as with previous structures such as the famous Thermal Baths at Vals, Switzerland, or the Bruder Klaus Chapel in Mechernich, Germany, Zumthor has emphasised the sensory and spiritual aspects of the architectural experience, from the precise yet simple composition and ‘presence’ of the materials, to the handling of scale and the effect of light.
At the heart of Peter Zumthor’s practice is a refined selection of materials used to create contemplative spaces that evoke the spiritual dimension of our physical environment. As always, Zumthor’s aesthetic goal is to customise the building precisely to its purpose as a physical body and an object of emotional experience.
Hortus conclusus

'A garden is the most intimate landscape ensemble I know of. It is close to us. There we cultivate the plants we need. A garden requires care and protection. And so we encircle it, we defend it and fend for it. We give it shelter. The garden turns into a place.
Enclosed gardens fascinate me. A forerunner of this fascination is my love of the fenced vegetable gardens on farms in the Alps, where farmers’ wives often planted flowers as well. I love the image of these small rectangles cut out of vast alpine meadows, the fence keeping the animals out. There is something else that strikes me in this image of a garden fenced off within the larger landscape around it: something small has found sanctuary within something big.
The hortus conclusus that I dream of is enclosed all around and open to the sky. Every time I imagine a garden in an architectural setting, it turns into a magical place. I think of gardens that I have seen, that I believe I have seen, that I long to see, surrounded by simple walls, columns, arcades or the façades of buildings – sheltered places of great intimacy where I want to stay for a long time.'
Peter Zumthor
May 2011 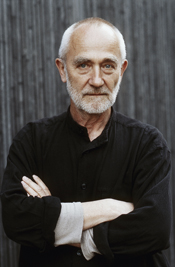 Born in Basel in 1943, Zumthor trained as a cabinetmaker at the shop of his father, as a designer and architect at the Kunstgewerbeschule Basel and at Pratt Institute, New York. In 1979 he established his own practice in Haldenstein, Switzerland. Major Buildings: Protective Housing for Roman Archaeological Excavations, Chur, Switzerland, 1986; Sogn Benedetg Chapel, Sumvitg, Switzerland, 1988; Therme Vals, Switzerland, 1996; Kunsthaus Bregenz, Austria, 1997; Swiss Sound Box, Swiss Pavilion, Expo 2000, Hanover, Germany, 2000; Kolumba Art Museum, Cologne, Germany, 2007; Bruder Klaus Field Chapel, Wachendorf, Germany, 2007. Major Awards: Carlsberg Architectural Prize, Copenhagen, 1998; Mies van der Rohe Award for European Architecture, Barcelona, 1998; Spirit of Nature Wood Architecture Award, Wood in Culture Association, Finland, 2006; Praemium Imperiale, Japan Art Association, 2008; The Pritzker Architecture Prize, The Hyatt Foundation, 2009.
Piet Oudolf
Oudolf’s projects include the internationally renowned High Line in New York, which involved planting along a railway line that winds through the city. Combining minimalism with ecology, this garden was conceived of as a series of interwoven elements that lead visitors along a richly planted path. Other notable designs include the Lurie Garden in Millennium Park, Chicago; Wisley, the Royal Horticultural Society Garden in Surrey; Il Giardino delle Vergini at the 2010 Venice Biennale; and his own innovative garden in Hummelo, The Netherlands. He is the recipient of numerous awards including the 2010 Award of Distinction by the Association of Professional Landscape Designers and the 2009 Dalecarlica Award, Sweden. Oudolf’s garden was also awarded ‘Best in Show’ at the 2000 Chelsea Flower Show, London. In 2010 he was named as one of the 100 Most Creative People in Business by Fast Company Magazine.
a 11:01