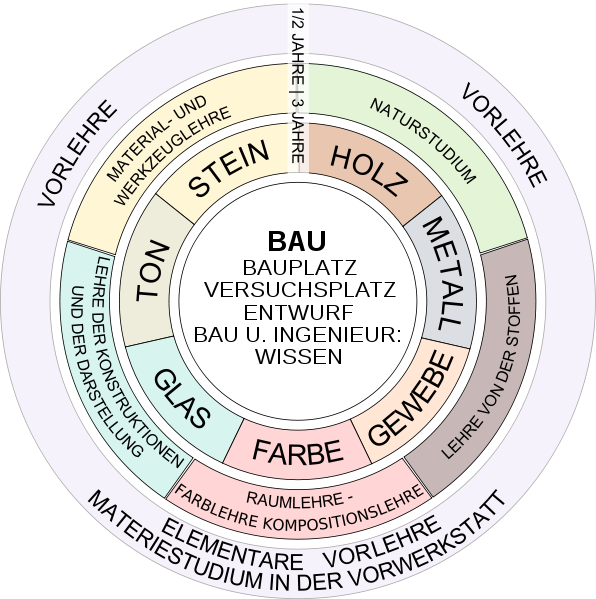 The Bauhaus began with an utopian definition: "The building of the future" was to combine all the arts in ideal unity. This required a new type of artist beyond academic specialisation, for whom the Bauhaus would offer adequate education. In order to reach this goal, the founder, Walter Gropius, saw the necessity to develop new teaching methods and was convinced that the base for any art was to be found in handcraft: "the school will gradually turn into a workshop". Indeed, artists and craftsmen directed classes and production together at the Bauhaus in Weimar. This was intended to remove any distinction between fine arts and applied arts.
The reality of technical civilisation, however, led to requirements that could not only be fulfilled by a revalorisation of handcraft. In 1923, the Bauhaus reacted with a changed program, which was to mark its future image under the motto: "art and technology - a new unity". Industrial potentials were to be applied to satisfactory design standards, regarding both functional and aesthetic aspects. The Bauhaus workshops produced prototypes for mass production: from a single lamp to a complete dwelling.
Of course, the educational and social claim to a new configuration of life and its environment could not always be achieved. And the Bauhaus was not alone with this goal, but the name became a near synonym for this trend.The history of the Bauhaus is by no means linear. The changes in directorship and amongst the teachers, artistic influence from far and wide, in combination with the political situation in which the Bauhaus experiment was staged, led to permanent transformation. The numerous consequences of this experiment still today flow into contemporary life.
a 15:51